A discussion about children and domestic abuse is taking place today in the House of Commons.

The debate was set up by Labour MP Liz Twist, and will look at the effects of domestic violence on children, contact disagreements between mothers and fathers, parental alienation and the implementation of the Domestic Abuse Bill.

The Domestic Abuse Bill, which was included in the Queen’s Speech, will be re-introduced by the current government after falling through during the last General Election.

The Bill establishes a Domestic Abuse Commissioner, bans cross-examination in person in family proceedings in certain circumstances and makes provision for violent or sexual offences, and offences involving other abusive behaviour.

Home Office Minister Kit Malthouse said the Bill would return to Parliament before Easter in a Commons debate held on 5th February.

The House of Commons library has an excellent page offering detailed information about the Bill and the background to the debate. We are adding some of the links the page offers below:

A Westminster Hall debate on the sexual and criminal exploitation of looked after children takes place today.

The debate, which will be led by Ann Coffey MP and is scheduled for 2.30pm, will focus on the latest report from the APPG for Runaway and Missing Children and Adults and ways to make placements safer for children.

The APPG is asking the government to introduce an Emergency Action Plan to tackle the issue. Key measures the APPG would like to see implemented include funding for councils to develop local provision, including children’s homes and foster placements, as well as  regulation and inspection of semi-independent accommodation.

The APPG’s Chair is Ann Coffey, the MP hosting this afternoon’s debate. The Group has two Vice Chairs, Tim Loughton and Sir Peter Bottomley, while the position of Secretariat for the APPG is held jointly by The Children’s Society and Missing People, who were both paid up to £3,000 for their engagement with the APPG. As of the last AGM (October 2018), the group did not publish an income and expenditure statement.

You can see full details for the APPG on the Register at page 996.

Westminster Hall debates allow MPs to raise local or national issues with a view to receiving a response from a government minister.

The debates are open to the public and are held in the Grand Committee Room, just off Westminster Hall.

It took us a little while, but we can now share with you the summary for our debate in the House of Commons on child abuse within a faith setting.

The summary gives you a run-down of the speakers’ speeches, the questions asked by the audience and links to organisations mentioned, individual guests who spoke and debate materials.

We hope you find the summary interesting.

On Tuesday 18th November, we helped to organise and chair a debate in the House of Commons on child abuse and its existence within different religious settings, including the Catholic Church, the Church of England, Judaism and Islam.

The debate lasted for two and a half hours and when we asked the audience if they wanted a short break at the half way point, they unanimously declined. It was a very thought-provoking evening, filled with peaceful questions and an audience who graciously sat through seven panel speeches and launched themselves into the discussion with many and varied views, all fascinating.

We can now share some photos of the event with you, as well as the audio of the panel delivering their speeches. We hope very much that more media will be made available in the next few days, but in the meantime come and relive the debate with us.

Last night’s debate was hugely successful, with a full house and lots of thought-provoking comment, and it’s with great pleasure that we can share the speeches given by our panel members.

From Baroness Cox’s opening remarks on FGM, child sexual abuse and religion’s part to play in monitoring and addressing these concerns, to Rabbi Romain’s rousing speech on the responsibility of religious leaders to come together and explore the reasons behind this kind of behaviour, you’ll find a wide array of interesting and inspiring thought.

We hope you enjoy the speeches.

It is officially the day our debate takes place, as we move through the last few hours before we begin what we’re sure will be a very interesting evening in the House of Commons.

“Religious Power: Risk and Regulation”, will be looking at religious authority, its regulation and the extent to which that regulation has failed to safeguard against human rights breaches in the UK, and internationally.

The debate will look at child abuse within a faith setting and ask whether religious leaders are addressing the problem sufficiently, and whether the current inquiry into child abuse has placed sufficient emphasis on this area of child sexual abuse and exploitation.

If you are coming to the event, please feel free to tweet about it whilst you’re there, using the hashtags #RRR #ChildAbuseDebate and #PanelInquiry.

If you were unable to grab a seat this time, don’t worry, we will be posting up the speeches, audio and photos of the night for you shortly after the event.

Not long to go now before our next event in the House of Commons and we have a fantastic poster to show you, which highlights our debate on the 18th November, “Religious Power: Risk and Regulation”. This debate will look at religious authority, its regulation and the extent to which that regulation has failed to safeguard against human rights breaches involving child sexual abuse and exploitation.

The poster was made for us by Clare Whiting, and on behalf of the sponsors of the event we say a big thank you to her for all her patience and hard work (and more patience). You can see our lovely poster below: 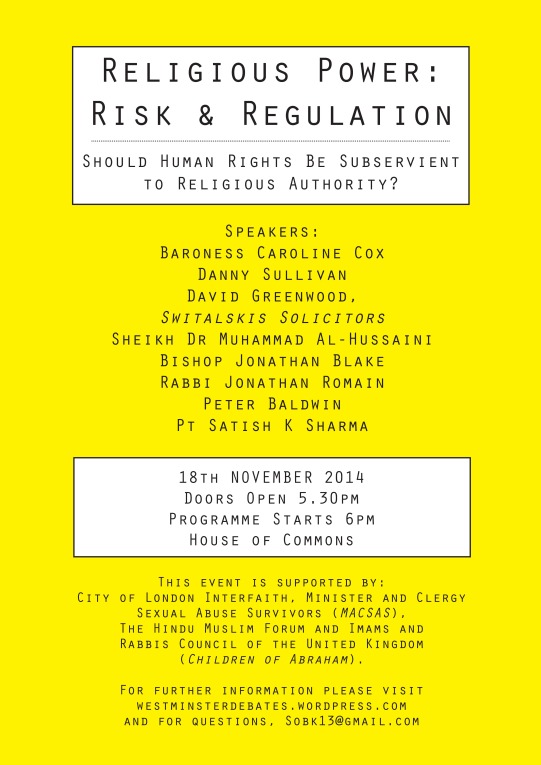 We are delighted to welcome Danny Sullivan as a panel speaker for our House of Commons debate, “Religious Power: Risk and Regulation,” which will be looking at child abuse within a faith setting.

Danny has worked in the education and justice sectors. He was Director of Education for the Diocese of Oxford under Bishop Richard Harries. He worked as a senior civil servant with the Magistrates and Crown Courts in London for five years up until his retirement in 2008. Following his retirement he led a project for the Foreign Office and Ministry of Justice in Algeria initiating and developing judicial collaboration between the two countries.
Danny is also a retired Hampshire magistrate having sat in the criminal and family courts.
He most recently accompanied two survivors of clerical abuse in England to the meeting in the Vatican with Pope Francis.
You can read more about our event here and read about our other panel members here, too.

With ever-growing concerns surrounding child sexual abuse within a faith context and the current investigation into nationwide child abuse by the Lord Mayor Fiona Woolf, our debate, “Religious Power; Risk & Regulation” has been created with a view to support and inform this inquiry and to open up discussion with faith groups and members of the public in the UK.

The debate will take place in the House of Commons on Tuesday 18th November, at 6pm.

Co-hosted by several respected religious organisations, who promote peace and understanding between faiths and a non practicing public, this debate hopes to create an ongoing dialogue between the most senior members of our clergy and government.

Our dedicated website offers you all the latest news on the debate, the issues it raises and a look at our panel members and partners:

This is an open event, so if you would like to attend, please email Natasha at Sobk13 at gmail dot com. Thank you.

Please note that places are going fast, so do book now to avoid disappointment.

Together with Family Law in Partnership, Researching Reform hosted a debate in the Palace of Westminster on  Monday 12th December, 2011 on the riots this August and what part the family justice system could play in supporting families and easing social unrest.

The speeches for the evening are now up on the site and a summary of the evening will follow shortly.

There are also photos to take a peep at, the quality of which we apologise for as we found ourselves chairing the debate unexpectedly and as a result we were not able to take photos whilst the event was happening! (But we tried to do our best with camera phones)…..

You may note people smiling or even laughing in some of the photos. Strange, but true.

If you’d like to see more about the debate, you can access its home page, here, too.