A new campaign launched by the UK’s counter-terrorism police is urging children not to stop and take photos or video footage whilst being caught up in terror incidents. The call comes after the Parsons Green attack where individuals stopped to take photos of the partially exploded bomb at the scene.

The campaign, which is using the slogan, “Run, hide and tell” is the first of its kind. Police are also hoping that key messages within the campaign will be taught as part of the national curriculum at schools across the country.

The police are very keen to reach children as several terror attacks in the UK have specifically targeted them, like the Manchester Arena bombing and recent incidents in London.

Research suggests that when young people are at the scene of a terror attack, they feel it’s a good idea to film or capture the incident in order to help the police. An incredibly brave and thoughtful instinct, children today are more mindful and committed to the greater good than ever, but their mindset sometimes places them at risk. The campaign aims to remind children to put their safety first.

A Run, Hide and Tell emoji has been created for the campaign, which aims to target 11-16 year olds, as part of the “citizenship” portion of the national curriculum. There is also a video which features celebrities and people from the Royal Marines and the martial arts telling young people what they would do if they were caught up in a terror attack. 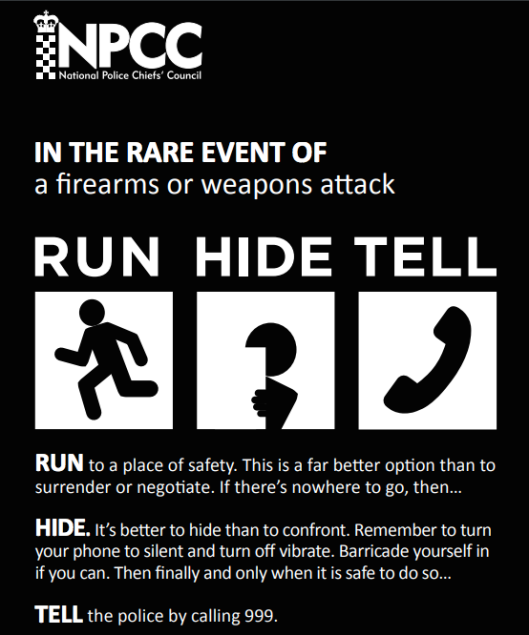