A bill currently making its way through the Welsh Assembly, which removes the right to hit a child, has reached the third stage of its journey.

Stage 3 involves a detailed look at the legislation, by every member of the Assembly in Plenary, as well as proposed amendments to the law. Members have five working days before the meeting takes place to table any amendments they would like to add.

The Children (Abolition of Defence of Reasonable Punishment) (Wales) Bill abolishes the common law defence of reasonable punishment (chastisement), which means that once ratified, parents or those acting in loco parentis will no longer be able to use this as a defence upon being charged with the assault or battery of a child.

The Bill’s page on the National Assembly of Wales’ website outlines the law’s purpose and background:

“The Bill is intended to support children’s rights by prohibiting the use of physical punishment, through removal of this defence. The intended effect of the Bill, together with an awareness-raising campaign and support for parents, is to bring about a further reduction in the use and tolerance of the physical punishment of children in Wales.”

Britain is now the only country in the UK which has failed to consider legislation banning the smacking of children in a home setting.

Ireland was the first state to ratify legislation banning smacking (a term we would like to see abolished too, because it downplays child assault and battery), which it did in 2015.

Scotland has promised to incorporate similar legislation, and held its own Stage 3 meeting on October 3, in which the Scottish Parliament looked at tabled amendments to its Children (Equal Protection from Assault) (Scotland) Bill. The meeting is very much worth a watch for the insightful comments around the Bill’s shortcomings as it stands in draft form.

Currently, 58 countries around the world have placed a total ban on corporal punishment in the home.

British politicians have routinely ignored calls by charities and groups like Researching Reform to make all forms of child assault illegal, with several ministers seemingly in favour of the practice. Both David Lammy MP and former Justice Secretary Chris Grayling have openly admitted to hitting their children and standing by corporal punishment as an effective way of raising children.

But established research contradicts that view.

The Children (Abolition of Defence of Reasonable Punishment) (Wales) Bill is scheduled to have its Stage 3 meeting on Tuesday 21 January 2020 and can be watched on Senedd TV.

Many thanks to Professor Joan Durrant for sharing this development. 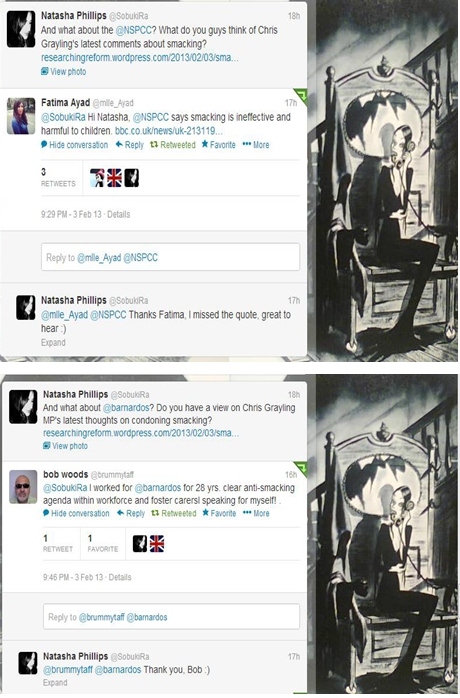