The Divorce, Dissolution and Separation Bill had its second reading in the House of Commons on 25th June.

The comments during the discussion make for interesting reading, and the participants’ histories do too.

The Bill aims to remove the need to show fault during divorce proceedings in order to process an application for the termination of a marriage. The legislation aims to use modern language as well.

The Divorce, Dissolution and Separation Bill is a government bill, and it has been sponsored by Justice Secretary David Gauke.

Gauke was recently the subject of a no confidence vote by his constituency Conservative Association, for opposing a no-deal Brexit. The motion was defeated 123 to 61.

Currently the law requires anyone filing for a divorce to choose one of three fault-focused reasons: adultery, unreasonable behaviour and desertion.

The proposed legislation would keep irretrievable breakdown as the sole legal ground for divorce and dissolution but would replace the current requirement to show evidence of that breakdown with a conduct or separation fact combined with a statement. Couples would also have the option to make a joint statement. The proposals would remove the ability to contest an application for divorce.

The legislation includes a new minimum period of 20 weeks from the start of divorce proceedings to the point at which the applicant can confirm to the court that a conditional order could be made.

Speaking about the extended period, David Gauke said: “Our proposal will make the court process towards a conditional order less rushed and give couples further time to consider the implications of the divorce.

Between 2011 and 2018, around two thirds of cases reached conditional order in less than our proposed 20-week minimum period.”

Politicians discussing the proposed legislation made several thought-provoking, occasionally good-humoured, and at times controversial comments during the debate, so we thought we would share a selection.

Ivan Lewis, the former Labour MP investigated over sexual harassment allegations now running as an independent member of parliament used the debate to bring up parental alienation, and offered this view:

“I have only recently become involved in this campaign on parental alienation. Hundreds if not thousands of parents are estranged from their children because the resident parent seeks to manipulate the child against a non-resident parent for no reason whatsoever.  Is it not time that we found a legal framework… to tackle this problem?”

A significant majority of resident parents are still mothers, which has led those engaged in the parental alienation debate to view gender as an inherent characteristic of those engaging in alienating behaviour. Data suggests that there are around 1.8 million single parents, of which 90% are single mothers.

“I warmly congratulate the Government and the Secretary of State on introducing this Bill. I think I have married more people than anybody else in this House.”

Bryant was one of 90 Labour MPs to sign a letter asking Jeremy Corbin to launch a fresh review into anti-semitism allegations against MP Chris Williamson after he was readmitted to the party.

Labour MP Richard Burgon made the headlines last month after The Sun claimed Burgon used Nazi imagery for the promotion of a heavy metal album he produced with his band. Burgon sued the Sun for libel and won. He has also been accused of dragging his heels over legal aid reform by Labour campaigners.

Burgon offered this thought about marriage:

“I know that marriage is technically a contract, but it seems strange to think of it that way when it is such a personal and emotional thing.”

Fiona Bruce offered a hard-right perspective on divorce (and ended up hogging the debate so much that the Deputy Speaker had to shout “Move on!”):

“A lot of emerging research shows that the shock of marriage break-up can be greater for children when there has not been conflict in the parents’ relationship than when there has been.

I accept that not every marriage can be maintained and that it is sometimes better for one to end. I am also very much aware that many single and separated parents do a brilliant job. However, this Bill makes it easier to leave a marriage.

I do not believe that successive Governments have put in place policies and procedures to help to strengthen relationships, and this Bill will not do so either.”

Jim Shannon, a DUP MP mentioned a story in the media which we hadn’t seen. Shannon, who has the biggest expenses bill in Parliament, is being investigated by the parliamentary spending watchdog for the second time in three years. Jim said:

“Is [Fiona Bruce] aware of a story in the press a month or so ago about a father and mother who were divorcing, and when it came to deciding who would have responsibility for the children, neither parent wanted it?”

Conservative MP Julian Knight is part of an inquiry into reality TV in the UK, after a guest died on the Jeremy Kyle show:

“We should not have any lies in a legal process.”

“Prior to the 1969 Act, [Barristers] used to get what was called “ordinary hotel evidence”, which was an affidavit from the chambermaid or the waiter, who happened to have taken breakfast in bed to a couple.”

Neill is the chairman of the Commons justice select committee. He called out the government in June over its decision not to publish its review of what went wrong during a series of court IT meltdowns in January.

“This Bill is by no means anti-marriage…. [it] is a Bill for anyone who agrees that the end of a relationship should be a time of reflection, and not of manufactured conflict.”

“The current requirement incentivises that sense of attribution of fault, which does nothing to ensure that the relationship between the two parents can be as strong as possible, and it is the children who lose out in those circumstances.”

“In the context of domestic abuse, for example, it is striking how the likes of Women’s Aid have been very supportive of these measures because of their concern that there might be women trapped in marriages who do not want to attribute blame because they feel that may result in a further deterioration in the relationship.”

“Continuing in a legal relationship that is no longer functioning can be destructive to families, and the law ought to deal with the reality of marriage breakdown as constructively as possible. The current law does not do that.”

“Whatever family structure children grow up in, they benefit most from stable, loving and caring relationships with parents and other close family members. We are clear that when parents have taken this difficult decision, children’s best interests are served by minimising conflict during and after the legal process.”

You can read the whole discussion here. 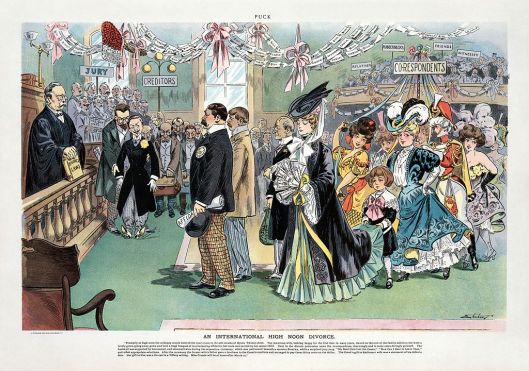 4 thoughts on “Disgraced MP tells Parliament – Thousands of Mothers are Alienating Fathers From their children.”