A case riddled with management errors prevented a child from being able to speak to the judge in her case, a High Court judge said.

Mr Justice MacDonald criticised the child’s guardian and the social services team for acute case management errors which included failing to ensure that one of the children in the case could speak to the judge.

The 15- year old girl had asked to meet with the judge so she could speak with him. Confusion around the 2010 guidelines on judges speaking to children led to the child’s guardian failing to notify the judge of the teenager’s request in good time.

The judgment is significant in that it highlights a current gap inside the system: children still do not have the right to speak with family judges overseeing their cases. This oversight makes the current process for discussion discretionary and dependent on whether the judge wishes to engage with the child in the case.

The 2010 guidelines are also unnecessarily narrow and prevent children from talking about their wishes and feelings, or sharing important information with the judge which may have been missed or ignored by child welfare professionals. Currently the only topic of discussion a judge can engage in with a child is how the court process within the context of their case works.

The overall effect sees judges talking “at” children for the most part, rather than allowing for a meaningful two-way discussion.

There is currently no information available on how many judges have spoken to children after a request under the guidelines was made. The number though, is likely to be very small.

Many thanks to Charles Pragnell for alerting us to this case. 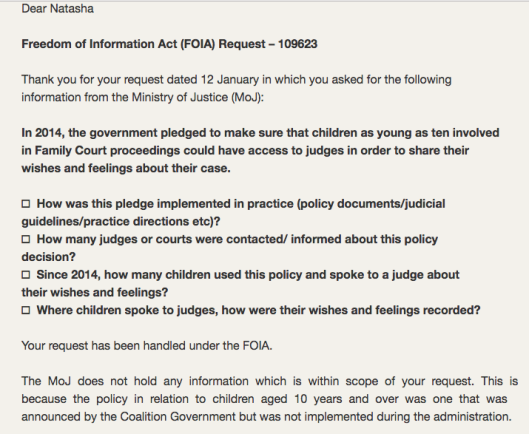