Ireland has just launched a public consultation on open and semi-open adoptions which could pave the way for biological families to participate more fully in the adoption process and stay in contact with their children after adoption.

The country’s department for Children and Youth Affairs is holding an open debate today which will include adoption experts, service providers and groups focused on children’s rights and their perspectives on welfare issues which affect them.

England and Wales currently practice a form of open adoption though contact between birth parents and their biological children usually ends after an adoption order is made.

The Children and Families Act 2014 in England and Wales allows post-adoption contact with birth parents, but it is heavily tilted in favour of the wishes and feelings of the adoptive parents, rather than the best interests of the adopted child.

A growing body of research produced by social workers and child welfare experts is also starting to challenge what are increasingly being seen as damaging and restrictive policies around child contact with birth parents within the adoption process in England and Wales.

“‘Open adoption’ is most commonly understood to refer to arrangements involving post-adoption contact between members of birth and adoptive families of adopted children under 18.

‘Semi-open adoption’ usually means arrangements for indirect contact such as the sharing of information and or items between members of birth and adoptive families, usually facilitated or mediated by social workers. In practice, open adoption and semi-open adoption may take on many different forms, including:

The questionnaire contains sections which ask for your views on open and semi-open adoptions.

Ireland’s Children and Youth Affairs minister Katharine Zappone is concerned about the impact of current adoption policies on children’s health and wellbeing.

Zappone told the Law Society Gazette Ireland, “Understandings of what is meant by open or semi-open adoption vary but these terms usually refer to arrangements for information sharing between adoptive and birth families as well as an option for contact.

“This is a complex and sensitive issue.  As we are in the early stages of having this discussion in Ireland, it is vital that we gain the views of those affected by adoption as well as other key stakeholders in order to find out what works best for children and families.”

She added, “Adoption is a hugely significant event in the life of a child,” Zappone said.

“When considering any proposed change to adoption policy, we must be guided by what is in the child’s best interests.”

You can respond to the survey here.

Further reading on the subject can be found in these Researching Reform posts. 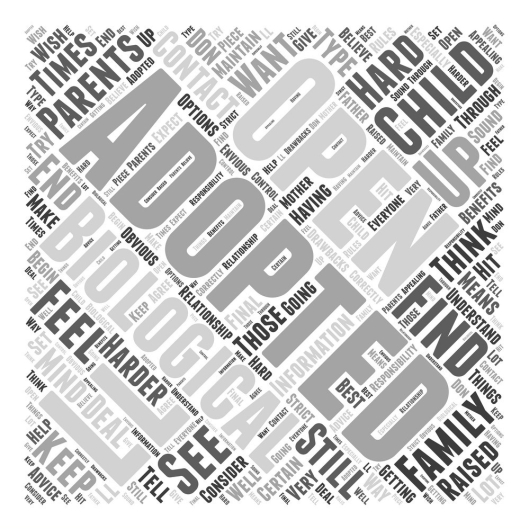