That’s what Researching Reform thinks about councils and agencies posting photos and information about children online, with a view to securing fostering and adoption placements. To expose the practice, this site has started a petition asking the government to acknowledge that the practice is illegal, and to end it.

Our petition explains how the current practice of children being advertised online and publicly, is a breach of their human right to privacy. The practice also ignores other legislation, which says that parents of children in care must be consulted on all important decisions affecting their children. Councils and agencies are routinely failing to get parental consent before marketing children online. The practice is also placing children’s lives at risk, as more and more children are being sourced through the internet to be sexually exploited.

We asked Twitter users what they thought of the practice, in a survey. The majority of those polled (82%) did not think councils should be able to advertise children publicly online for the purpose of finding adoptive families or foster carers, with 43% saying that placements were not about looks, and the remaining 39% believing that the practice put children in danger. A further 16% offered up other reasons as to why they felt the practice was not acceptable, or that it was reasonable, depending on their view. One tweeter thought that it was a pragmatic way to find children carers in an imperfect world, while another suggested that financial incentives for carers was a fair way to compensate foster families. Other survey takers were not comfortable with the fees offered to carers. A small minority of those surveyed (2%) thought that the practice was acceptable, taking the view that it was a buyer’s market.

When a child goes through child protection proceedings in the UK, names and other details that could identify these children are not allowed to be publicised in the first instance. The measure has been designed to protect a child’s right to privacy and ensure that they are not compromised through their identification, in any way. Most family court hearings are protected, which means that unless a judge gives permission for a case to be reported, and lists what information can be released, every detail that could identify a child remains private.

That right to privacy is taken away from children once a care order (placing a child in a children’s home or with foster parents), or an adoption order is made.

The removal of that right to privacy, which is protected by both the Human Rights Act and the UN Convention on the Rights of the Child, amounts to a breach of the law. In addition to these protections, both the UN Convention and the Children Act 1989 make it compulsory for all government bodies to ensure that any decisions made about children are always in their best interests.

If the government wanted to argue that the practice of publicly advertising children online and elsewhere to find them foster homes and adoptive families – and removing a child’s right to privacy to do this – was in their best interests, it would be an impossible position to hold today.

Research has made it clear that the government’s processes for finding children foster homes and adoptive parents are not working. A recent report by the Children’s Commissioner confirms that a large proportion of children in care experience more than one placement during their childhoods, with almost 2,500 children in care experiencing five or more changes over a period of three years.

That process includes advertising children online and in physical newspapers and magazines. The advertisements are intended to give prospective adopters and carers a chance to virtually meet these children and see if they like ‘the look of them’, but given the number of adoptions and fostering placements that break down, it’s become apparent that the practice is doing nothing for these children, and very obviously doesn’t have their best interests at heart.

It also puts children at risk of sexual exploitation, and death. The UK is facing the worst child sex trafficking epidemic it has ever seen within its borders. Last year, 10,000 children in care in the UK went missing, sparking fears that they were being sexually abused and exploited. The NSPCC called the internet “a playground for paedophiles”, and in a report published in 2011, The Child Exploitation and Online Protection Centre confirmed that a disproportionate number of sexually exploited children were looked after by a local authority, before or during exploitation.

Councils and agencies have no formal right to publish children’s photos and details online, especially in circumstances where children are old enough to understand the practice, or where family members still have parental responsibility for a child.

If a school wants to upload a photo of a child who is not in care onto its website, permission always has to be given by the child’s parents before the school can post the image. That is because parents have parental responsibility for their children, and a request by a school to upload an image of a child onto the internet is significant enough for it to require parental permission. Parental Responsibility is more than just a general description of a parent’s duties towards a child. It is a legal term which vests a duty in parents to look after their children and to be involved in material decisions which affect them. That responsibility still belongs to parents whose children are in care and have not been made the subject of an adoption order. This means that most of the time, decisions like posting photos of their child online, still rests with the parents, and not the local authority. If we follow the logic through, councils then, must always ask parents whose children are in care for permission to use their photos in adverts.

Getting the government to ban this practice won’t be easy. Despite an economic downturn and massive budget cuts to the family justice system, the fostering sector is booming. Valued at £1.7 billion, fostering agencies have become so lucrative that the sector has seen a sharp rise in foster care companies backed by large private equity funds. The adoption sector, too, is driven by financial incentive, as can be seen by these interagency fees from the Consortium of Voluntary Adoption Agencies. The government has also introduced adoption targets, which invite councils to hit a certain number of adoptions in order to qualify for a cash prize.

Adoption and fostering agencies count on these advertising techniques to secure placements, often with the addition of deeply misleading narratives about the children they’re marketing. And if agencies are able to make money from multiple placements per child, there is little incentive to stem the high number of placements that break down.

While our petition demands that the government acknowledges that the posting of children’s photos and details online and in public documents for adoption and fostering placements, is illegal, there is more that needs to be done. The following issues are also connected to the marketing process used by councils and agencies:

A very big thank you to Jane Doe, and several other parents who very kindly spoke with us, and shared evidence and personal stories for this post. 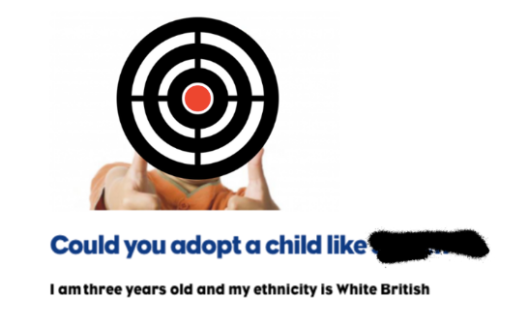