A former social worker sitting on the judging panel of the social care sector’s biggest awards ceremony, has pulled out after discovering that management company Capita, was sponsoring the event. Capita has been embroiled in several high profile scandals, which include the company’s involvement in creating financial incentives at the Home Office to remove people from the UK (Windrush).

Nick Berbiers announced on Twitter last week that he would not be attending The Social Worker of the Year Awards. It’s not the first time that Nick has raised concerns about sponsors at the annual event. In his statement, Nick describes previous attempts at trying to alert the organisers to unsuitable sponsors. The statement gives the impression that the Board did not take Nick’s concerns seriously, leading the social worker to periodically step down from the judging panel between 2010 and 2016. Nick says in his tweet that he missed the sponsor’s name when he initially got involved in this year’s event, however upon noticing Capita’s presence, decided to step down from the panel.

Social Workers Without Borders, a charity nominated for an award at the ceremony, has also said it won’t attend, after discovering that Capita was sponsoring this year’s event.

The embarrassing fiasco has led to the ceremony’s board of trustees promising to hold an “ethics audit” of the annual event’s sponsors.

Capita has a long record of marks against its name, which spans not only the Windrush scandal, but features a scathing review from the Commons Select Committee over its callous handling of medical assessments for disability benefits, which it managed on behalf of the government. The Committee concluded that 60% of Capita’s reports were unacceptable. A subsidiary company belonging to Capita which employed immigration removal escort staff, was also deemed this year to have used excessive restraint on detainees who were flown out of the UK, by HM Inspectorate of Prisons.

This development comes during a particularly difficult time for the social care sector. Hit by increasingly sharp budget cuts and in freefall as it struggles to cope with an out of date child protection system and rising referrals for support, the sector is constantly looking to find ways to balance its budgets. This has resulted in unlikely, and often unethical partnerships between organisations. An example where these kinds of pairings raise the greatest concerns involve children’s charities like Barnardo’s teaming up with adoption agencies to help bolster their support services.

Agreements which would ordinarily be viewed as deeply unethical, are now the norm inside the sector.

The government will be holding a debate today, looking at ways to fund the social care sector. Members of the public are able to attend the event free of charge, which starts at 3.35pm, and will be held in Committee Room 1, at the Palace of Westminster. 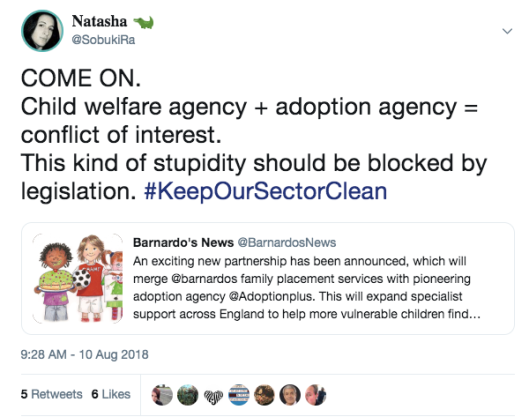