Sajid Javid has promised to make tackling sexual exploitation of children a priority, in his role as Home Secretary.

During a speech delivered today at the headquarters of the National Society for the Prevention of Cruelty to Children (NSPCC), Javid warned tech companies that they needed to crack down on online child sexual exploitation (CSE) in the same way they were now going about tackling extremism online.

The latest figures reveal a 700% increase in child abuse images being referred to the National Crime Agency (NCA) in the last five years. The data also estimates that up to 80,000 people in the UK currently present some kind of sexual threat to children online, with exploitative material increasingly featuring younger and younger children.

Javid also outlined new funding to tackle CSE, including an extra £21.5 million for law enforcement over the next 18 months to reduce the volume of offending and pursue the most hardened and dangerous abusers, £2.6 million for prevention work, with some of this grant going to the child protection charity the Lucy Faithfull Foundation, £250,000 for new ideas on how to detect and disrupt live streaming of abuse, and a further  £600,000 for Project Arachnid – pioneering technology that helps to identify and remove Child Sexual Abuse material from the internet. The Home Secretary has also promised 11 councils £13 million to protect vulnerable children from exploitation and abuse.

You can read Javid’s speech in full, here. 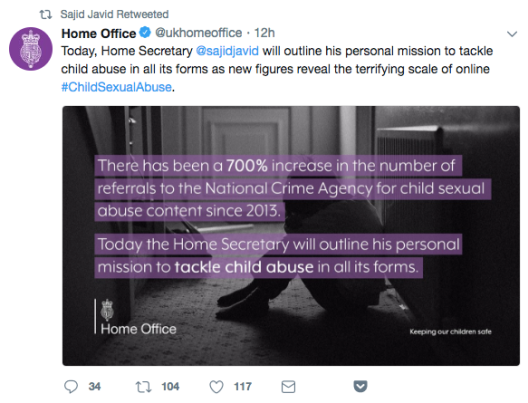 6 thoughts on “Sajid Javid: “Keeping Our Children Safe Will Be My Mission As Home Secretary”.”