As politicians get ready to debate non recent forced adoption practices in the UK, Researching Reform has called on Alison McGovern, the MP leading this debate, to include modern day practices of forced, or non consensual adoption. We tweeted Alison on Saturday, but have not yet had a response.

The motion to discuss forced adoption, which asks that the government recognise the “pain and suffering that the practice of forced adoption caused many women from the 1960s onwards”, has been widely discussed on social media, with campaigners pledging to contact Alison McGovern, and social work professionals supporting the move to widen the discussion, which takes place on Thursday this week, in the House of Commons.

Campaigner, Ian Josephs, who coined the phrase Forced Adoption, wrote to Alison on Sunday, along with several others child welfare reformers and family court activists.

Maggie Mellon, former Vice Chair for the British Association Of Social Workers, who remains outspoken about the way in which the current social care system treats children and families, welcomed the move to broaden the debate, on Saturday. 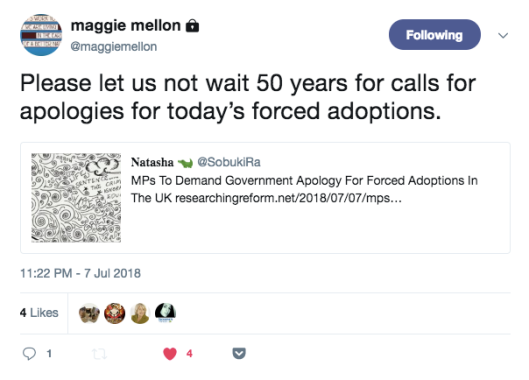