St Albans Film Festival is showing a documentary, entitled, “What Doesn’t Kill Me”,  which explores the phenomenon of children being removed from women survivors of domestic violence, this time in the US.

The documentary will be shown on Thursday 28 June, 7pm at Maltings Theatre, St Albans Film Festival. There will then be a Q&A session with the film maker Rachel Meyrick and Women Against Rape.

Women Against Rape very kindly sent Researching Reform further details about the Premiere, which we’re adding below. You can get your ticket here (they are £8 each).

“The film, entitled ‘What Doesn’t Kill Me’, is the first feature film of director Rachel Meyrick, who grew up in Harpenden and attended college in St Albans. It aims to shine a light on domestic abuse and the fact that many dangerous men are granted custody of children.

Rachel began filming ‘What Doesn’t Kill Me’ in Oklahoma. She was making a short film in the state when she was introduced to a local shelter for abused women, and discovered the injustices they were experiencing.

She said: “Although this is a timely film for America, where radical misogyny is being exposed even in the highest offices and institutions in the country, high profile UK charities have confirmed that this happens in this country too.

“Up to 70 per cent of abusive fathers are getting custody of their children and women are losing all access to them, meaning they can no longer protect them from these dangerous men.”

The film tells the story of women fighting back against the court system, which appears to be biased towards male privilege and wealth. It exposes how the US justice system is letting down women and children and putting children in extreme danger by leaving them with abusive fathers.

In order to get the film made, Rachel had to take on all the roles within the film’s production herself, directing, editing and producing as well as operating the camera and sound.

Lisa Longstaff, spokeswoman for Women Against Rape, said: “What Doesn’t Kill Me is a moving and compelling documentary, which parallels what mothers are facing here in the UK. Domestic violence is now the most common pretext for taking into care and even forcibly adopting the children of women who report rape or domestic violence.

“By exposing the truth about the US, this film is an encouragement to everyone fighting against similar injustice in the UK. Mothers are routinely disbelieved or blamed for causing their children ‘emotional harm’.”

The film will premiere at the Maltings Theatre at 7pm on Thursday, June 28 as part of the fifth St Albans Film Festival this summer, and Rachel will host a Q&A following the screening.”

Many thanks to Women Against Rape for sharing this item with us. 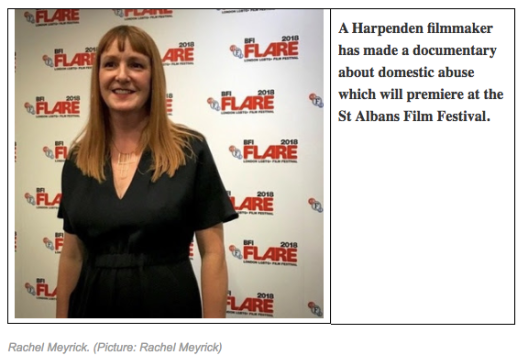