A new drama produced by Channel 4, tells the story of a girl who is about to be fostered, but disappears shortly after visiting her biological parents.

In a bid to offer a fresh take on a theme that has become increasingly popular with TV producers, the series makes the social worker the heroine of the story, portraying her as a devoted professional fighting for the girl’s right to know her biological parents. It’s a lovely sentiment, but not a common occurrence inside the sector, and so the programme is likely to receive quite a bit of feedback on this aspect of its story. The producer’s mother also worked in social care.

Another sticking point, which has more to do with the law than the production of this drama, will be the use of the term ‘abduction’ in the series. There is some debate over whether a biological parent can abduct their own child, less so in a legal sense where the term is defined, but more in relation to the emotional aspects of the term and its use in this context. It is a controversial term and one which biological parents who are unjustly accused of harming their children, and others, resent enormously.

The series consulted with one social worker and one police advisor during production. It would be interesting to know who these professionals were, as it would offer some indication of the direction the series took in its portrayal of the child protection system and child welfare practice.

There are question marks over the drama’s plot, too. We don’t yet know whether the girl has been murdered (the trailer suggests that members of the biological family may be caught up in criminal activity), or abducted by her biological parents to stop the foster placement. Maybe the series will work as a cautionary tale, telling us that the current social work guidelines are good and there for a reason (and that well meaning social workers are really a menace) – or will it look at care proceedings from Kiri’s point of view and remind us of the importance of breaking the rules when it’s in the best interests of a child?

We will have to wait and see. 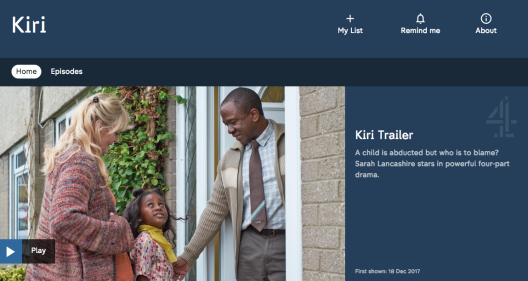