A potentially enormous loop-hole appears to exist which allows men and women to work in child protection without any kind of registration or monitoring, at all.

Researching Reform was contacted by a service user who recently wrote to The Health and Care Professions Council (HCPC), which regulates child welfare professionals, to raise concerns about a social worker at Staffordshire County Council.

The council is no stranger to controversy.  Branded a ‘shambles’ after accidentally leaking personal information about children in its care,  one of its social workers was also banned from working in child protection altogether after advising a vulnerable child to self harm. The local authority is fielding several more complaints and is currently under investigation.

The service user in this case needed the social worker’s full title and registration number to make a complaint, so she contacted Staffordshire County Council to get those details. The council replied that the social worker was a Senior Practitioner for Families First, a programme which aims to support vulnerable families, particularly those suffering from acute poverty.

It soon became apparent that she was not.

The HCPC’s response is alarming:

Researching Reform then decided to reach out to the HCPC on Twitter. We asked them for policy information on unregistered users and which bodies if any monitored their activities. They sent us a series of tweets and Direct Messages, none of which answered our questions. 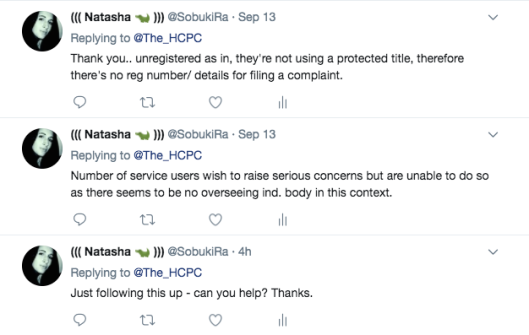 Protected titles are job titles which fall under the jurisdiction of a regulation body, allowing the body to keep tabs on professionals and ensure they are held accountable in the event of wrongdoing. If a person chooses to represent themselves using a title which is not recognised as protected, they are then effectively able to practice unregulated.

The title of Senior Practitioner is not a protected title, so the social worker in the case above is not required by law to be registered. This means she can practice as a social worker without any kind of regulation. It also leaves service users unable to file a formal complaint with an independent reviewing body, should there be concerns about the social worker’s conduct.

This loophole is already well known in the context of practicing psychologists, where unqualified individuals roam free, dispensing advice completely unwatched by any regulation authority – advice which is often accepted by Family Courts, without any legitimate confirmation of qualifications or experience.

The dangers of allowing this kind of unregulated activity are huge. The case of the social worker above, who has been able to avoid registration and regulation just by calling herself a Senior Practitioner, is one such example.

Families First work is highly sophisticated work, and the role of a senior practitioner is hugely demanding, requiring a high level of experience as a social worker, so any poor decision making or incompetence could change the life of a child forever.

It could lead to that child’s death.

So what can service users do if they’re concerned about a child protection officer?

Some relief exists in the Health And Social Work Professions Order 2001, under article 39(1) which reads:

Offences 39.—(1) Subject to paragraph (2), a person commits an offence if with intent to deceive (whether expressly or by implication)— (a) he falsely represents himself to be registered in the register, or a particular part of it or to be the subject of any entry in the register; (b) he uses a title referred to in article 6(2) to which he is not entitled; (c) he falsely represents himself to possess qualifications in a relevant profession.

But what happens if the person you want to complain about hasn’t lied about their position or qualifications? In the case of negligent care and advice, the options seem bleak. The HCPC suggests complaining to that person’s superiors, however an internal review is unlikely to be impartial. With no independent body to call on and little information about the individual on offer, the room for wrongdoing to occur and go undetected is vast.

Very many thanks to Jane Doe for alerting us to this development.