Baroness Hale of Richmond has become the first female President of the Supreme Court. The announcement was made today, along with other appointments which include 3 Supreme Court Justices and 7 new Justices of Appeal.

She follows Lord Phillips of Worth Matravers (1 October 2009 – 30 September 2012) and Lord Neuberger of Abbotsbury (1 October 2012 – present), the outgoing President who she will be replacing.

Lady Hale is perhaps best known for her work as a family law specialist, ushering in the Children Act 1989 which was a pioneering piece of legislation putting children at the heart of court proceedings involving them, and is passionate about feminism, equality and human rights. In 2013, she was appointed Deputy President of the Supreme Court of the United Kingdom.

Members of the public, journalists, lawyers and campaigners took to Twitter to share their delight at the news and congratulate the Baroness. 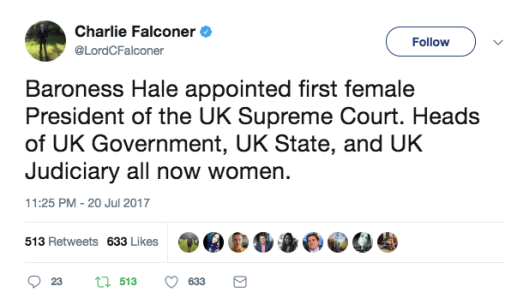 Lady Hale is one of the most popular judges in Britain, well known and much loved for her compassionate family law judgments, insightful reasoning and highly sophisticated interpretations of the law. She also happens to be Researching Reform’s favourite judge of the twenty first century.