For our question this week, we take a look at new legislation in California which decriminalises children engaging in prostitution.

There is a debate raging in America at the moment over this Bill. The wrangle is over a section which “bars law enforcement from arresting sex workers who are under the age of 18 for soliciting or engaging in prostitution, or loitering with the intent to do so.”

Right wing, conservative politicians in America have called the law irresponsible because it seems to legalise child prostitution and prevents children from being taken off the streets by police, into the safer alternative of custody.

The Bill was introduced by Democrat Senator Holly Mitchell. She says the law will prevent children from being punished for crimes committed under duress, and will allow minors to be placed in safe environments by support services.

Other groups in California, whilst welcoming the move, are not sure the state can cope with the added pressure to take children in as resources are scarce.

The article linked to above also explains that “while minors will be exempt from criminal charges under the new law, anyone caught engaging in acts with them will still be subject to prosecution since sex with a minor is considered statutory rape.”

Our question then, is just this: are you for, or against the new law? 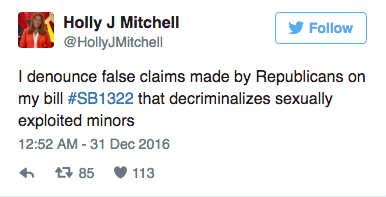 Thank you to Maggie Tuttle for sharing this development with us.