Now infamous dating website Ashley Madison – a site which facilitates extra marital sex – has been hacked into and the personal details of its 37 million users made public.

In this interesting article, a professor at the University of Birmingham suggests that we should blame the marketing company who runs the site for extra marital affairs, but is that right or are they simply tapping into a demand – a demand which has seen 37 million people sign up to this site?

Having sex with someone other than your spouse during a marriage is not illegal in the UK, but it is defined as adultery which can be grounds for divorce. Depending on where you look, adultery’s meaning ranges from “any act of sexual intercourse by a married person with someone not his or her spouse”, to “extramarital sex that is considered objectionable on social, religious, moral or legal grounds.”

In some parts of the world adultery is illegal, and can lead to fines, a prison term and even the death penalty. To make matters more complicated, many of these measures are used to punish women who have been raped. Interestingly, adultery remains illegal in 21 states across America.

As details of the people who used Ashley Madison come out, some are simply denying they ever used the site.  Others are apologising, and throwing themselves at the mercy of a mesmerised public.

But is the author of the article on this phenomenon right? Should we blame the marketing company, who also owns a site called Established Men, which ‘targets’ as she puts it, women looking to date wealthy men, or should we be questioning the way society deals with love, sex and ultimately marriage?

Go to some parts of the world, and adultery is seen not as a taboo or a stigma, but as a natural component to a marriage – a way of keeping your marriage alive and significantly, being honest about your sexual appetite. France, of course, is a case in point. However, they too have their contradictions – it is far more likely that men will cheat than women and the Catholic Church there, ever watchful, has taken to trying to sue adultery websites on the grounds that such services promote “duplicity, lies and breaches of the law”.

Setting aside the rights and wrongs of adultery, it seems to us at least that sites like Ashley Madison, morally divisive though they may be, tell us something interesting about the way we cope with the complexities of marriage. We know that the vast majority who file for divorce are women, but we also know that when it comes to adultery, men have the lead – on Ashley Madison at least. Statistics though, are not clear enough to give us any real indication as to why adultery is so prevalent, for that we need to ask deeper questions about society and social interaction at large.

At Researching Reform, we are, for better or for worse, until death do us part, hopeless romantics, so sexual affairs hold no allure for us, and it seems women in general feel the same way – if wives do stray, it’s not, it seems, for sex, but for love. So why do people stay married? Is societal pressure to stay together so great that we give in to the cultural norms which surround us, or is infidelity not always a sign that a marriage is ending? Are we always honest with ourselves about the state of our relationships, or are we sometimes afraid to admit a marriage may have run its course?

Or perhaps it is far simpler: perhaps marriage is a social construct which only suits a select few, and like the many and varied species on the planet, one relationship style does not fit all.

What do you think? Are sites like Ashley Madison really to blame, or should we be looking at our cultural norms and asking ourselves whether they are fit for the twenty-first century? 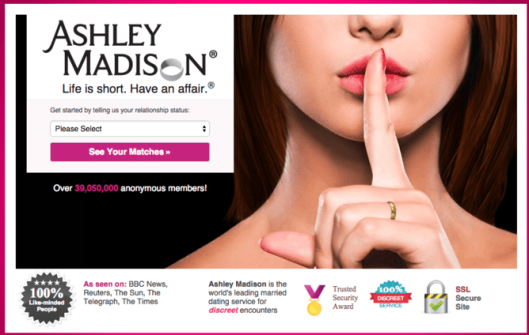