DadsHouse is currently working with Harry Borden, perhaps one of the most accomplished and exciting contemporary photographers of our generation, as DadsHouse continues its nationwide tour ‘In Dad’s Shoes‘, which charts the lives and loves of lone dads and their kids in the UK through the medium of the photograph. (If you have time, why not stop by the Facebook Page and ‘Like’ the tour? This might make the ‘In Dad’s Shoes’ team a little emotional. Please bring a hankie, if you drop by).

In Dad’s Shoes Launch at The House of Lords, June 2012

And now DadsHouse is offering lone dads and their little ones the chance to be photographed together by Harry Borden, who has captured icons like Margaret Thatcher, Tony Blair and a host of world-famous actors, actresses, entrepreneurs and sportsmen.

Harry Borden is currently looking to photograph fathers who are bringing up their children on their own, so if that’s you, and you and your little dudes or dudettes like the idea of having a beautiful photograph taken by an astonishing photographer, to treasure forever, please get in touch with the founder of DadsHouse, William McGranaghan, either by phone, on 07765183504 or via email at william@dadshouse.org.uk. 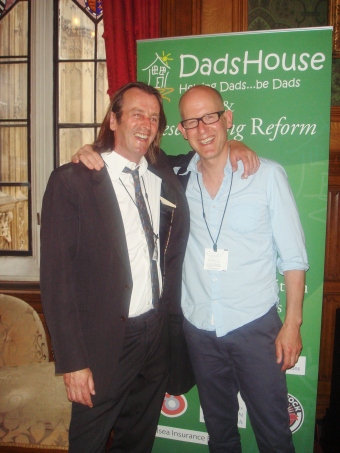 Harry Borden (right) with DadsHouse founder Billy McGranaghan (left) at the ‘In Dad’s Shoes’ Launch at the House of Lords, June 2012